For even experienced anglers, a first-time trip to fish Lake Tahoe can be overwhelming. At best, it’s a difficult assignment to know how to approach the massive lake straddling the California-Nevada border. So it makes sense that listening to or even fishing with a local such as Tahoe fishing guide Joby Cefalu is a wise investment to help overcome the challenges Tahoe presents.

“You could spend a lot of hours and fish a lot of miles on Lake Tahoe with little or no luck,” says Cefalu, who operates Mile High Fishing Charters“(Tahoe) is not a simple fishery and you really have to know the shorelines in order to be able to fish that lake, and to know where they’re at the rest of the year.” That said, this popular destination is expected to be productive this summer, particularly for Mackinaw and kokanee. And in Cefalu, you have a native son who has put in a lot of hours to figure out how to fish this big body of water.

OR YOUNGSTERS, GROWING UP in an outdoor playground such as Lake Tahoe is a pretty good life, especially if you love fishing like young Joby Cefalu did. “My entire childhood was spent on a skiff in Tahoe. And I’d spend my summers commercial fishing with my uncle in Fort Bragg. So that fishing bug was in me,” Cefalu

the way over to the Camp Richardson shelf,” he says. Kokanee fishing in Tahoe means ultralight tackle, with Cefalu going with the old standard setup of small flashers or dodgers with a Kokanee Bug tipped with corn. If you don’t have Downriggers, 10 to 12 colors of lead core line work fine. Or if your boat has down riggers set them anywhere from 55 to 110 feet “and you’ll find really good success,” Cefalu says. If you’re on a good school of fish, you could get as many as 50 strikes while reaching a five-fish limit of Kokanee.

“You can always fish for both Kokanee and Mackinaw at the same time because those Mackinaw lay underneath the schools and feed on (Kokanee),” he adds. “So I’ll usually stack a few lines and run some big bugs for Mackinaw beneath the schools. And then run a couple lines stacked on the down rigger for the Kokanee. Usually I run a flasher on the deeper rod with about an 18-inch leader

Mackinaw, or lake trout as they’re also known. But as he got into a guiding about a quarter of a century ago, he began to understand that the best approach to take on his favorite lake was to target its healthy population of Macks. “As far as the lake trout go, there are more and more people fishing for them with less and less secrets out there,” he says.

“That’s a really healthy fishery on Lake Tahoe, so it actually has become a destination for people who want to bring their boat and fish, which I think is fantastic because there is an abundance of fish in Tahoe.” SO WHAT WORKS BEST for targeting lake trout in Tahoe? Cefalu runs seminars at sports shows discussing the hows and whys of fishing the lake. Understanding that Tahoe is the largest alpine lake in North America and one of its deepest, Cefalu does his best to explain how to tackle so much water.

“When I describe the fishery to people and I talk about their future experience of coming up and enjoying Lake Tahoe, I try to break up the lake into multiple fisheries. Instead of looking at the lake as one big fishery and this was taught to me that you take that one fishery early on as a guide,” he says. “It’s a vast body of water and it’s all-mountain range. Above the water, you can see the mountain range around you in the big bowl. And then underwater it’s a big mountain range that goes out to a 1,200- to 1,600-foot drop.

So if you take on that lake as a whole, it’s going to eat you up.” Still, you can find plenty of fish this summer, even amid all the increased lake traffic of summer pleasure boaters and water skiers. And Cefalu wants those anglers he hosts to have an interactive experience while they seek a fat lake trout. “Not to put down those who troll, because trolling is an active style of fishing as well, it’s just that I’ve found over the years that my clients really enjoy jigging because they’re actively fishing for the entire trip,” he says.

For Cefalu, that means using 2 1⁄2 to 3-ounce herring jigs tipped with minnows. From about mid-May to the middle or end of July, lake trout are normally found between 60 to 90 feet of water. Light tackle about 10 to 12 pound test is his norm to target the Macks.The fish are often feeding on schools of Kokanee, meaning summer should be a peak time to catch plenty of fish, including some trophy-sized Mackinaw.

“It’s vertical jigging, so basically I’m keeping us straight up and down and (staying) vertical. I’m trying to drift, so it’s a lot of in and out of gear. And with that style of fishing, you’ll move around quite a bit and fish it inside-out or outside-in.” So as visitors from the Bay Area, Sacramento and beyond pour into Tahoe this summer some hoping to strike it rich at the casinos, others to hike and camp, and some to just lounge around the pool or at Tahoe’s beaches fishing should be on your checklist as well.

“That’s a really healthy fishery on Lake Tahoe, so it actually has become a destination for people who want to bring their boat and fish, which I think is fantastic because there is an abundance of fish in Tahoe,” Cefalu says of its lake trout.

Mackinaw are plentiful throughout the lake and can be caught trolling or, as guide Cefalu prefers for his clients, jigging depths anywhere from 60 to 90 feet of water in the late spring and summer. “It can be daunting and a lot of people don’t have the patience,” Cefalu says of conquering the big lake.

“And that’s where I think hiring a professional fishing guide is the best thing you can do in Tahoe.” 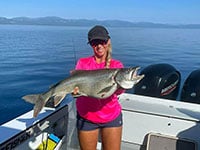 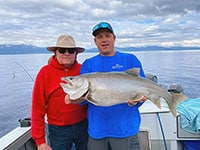 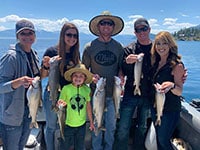